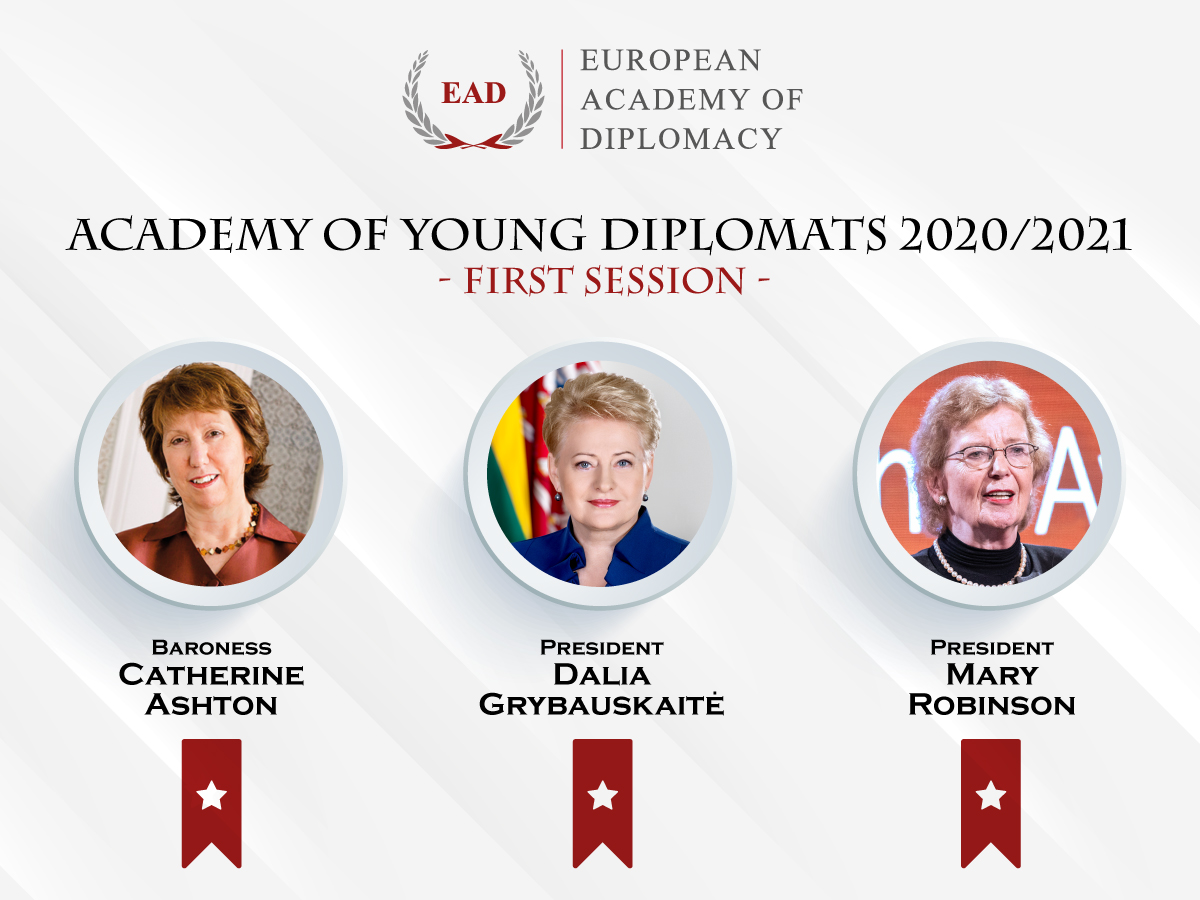 We are proud to announce that the Opening Session for the Academy of Young Diplomats 2020/2021 will commence with absolutely exclusive Special Guests and inspiring female leaders – President Dalia Grybauskaite, Baroness Catherine Ashton and President Mary Robinson.

Dalia Grybauskaitė is the former president of Lithuania (2009-2019). In the year 2014 she became the first woman to hold the position and be re-elected for a second consecutive term. Since 1991, when Lithuania gained full independence, Ms. Grybauskaitė held different posts in the country’s Ministry of Internal Economic Relations and Ministry of Foreign Affairs. After 1999, she became Lithuania’s chief negotiator with the International Monetary Fund and the World Bank. In 2000 President Grybauskaitė was appointed Deputy Foreign Affairs Minister and took a leadership role within the delegation responsible for negotiating Lithuania’s accession to the European Union (EU).  She emphasized Lithuanian military readiness and welcomed a NATO battle group as part of the alliance’s “enhanced forward presence” in Lithuania.

Catherine Ashton is the Baroness of Upholland, High Representative of the Union for Foreign Affairs and Security Policy and First Vice President of the European Commission in the Barroso Commission (2009-2014). Her main focus through her parliamentary career were human rights and education issues. Between 2001-2004 Mrs. Ashton served as a junior education minister, and in 2002 assumed the leadership of the early-childhood-development initiative Sure Start. It was in the year 2004 when Lady Catherin became a junior minister for constitutional affairs. In 2007, Mrs. Ashton served as a junior justice minister and shorter after she was promoted to leader of the House of Lords by Prime Minister Gordon Brown. Following, in the year 2008, she was appointed as Trade Commissioner to the European Commission.

Mary Robinson is the first woman to become President of Ireland (1990 – 1997) and former UN High Commissioner for Human Rights. President Robinson is known as an advocate for gender equality and women’s participation in peace-building. Appointed as Chair of The Elders in November 2018 she has travelled to the Middle East several times to encourage Israeli-Palestinan peace efforts. In 2012 she visited South Sudan urging a return to dialogue between Sudan and South Sudan. Later that year she was part of an Elders’ visit to Cairo to encourage Egypt’s democratic transition. As UN High Commissioner for Human Rights (1997-2002), Mary Robinson integrated human rights into the UN system dedicated to investigating and exposing human rights abuses across the world. In May 2016, Mary Robinson was appointed as the UN Secretary-General’s Special Envoy on El Niño and Climate.

The First Session of the program is coorganized by Konrad Adenauer Stiftung (KAS), Council of Europe, the Office for Democratic Institutions and Human Rights (ODHIR), World Forum for Democracy, PZU Foundation and Casimir Pulaski Foundation.