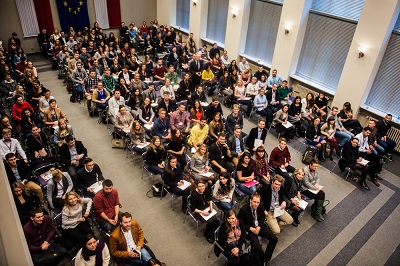 A week after the official inauguration, from 12th to 14th of December, the first session of the XI edition of the Academy of Diplomats took place. The main guest, Prof. Grzegorz W. Kołodko, gave a lecture titled “International sanctions – economic and political consequences” and spoke of the efficiency of sanctions using communist Poland as an example. Another topic he mentioned were the short and long-term consequences of the New Cold War. The thought provoking lecture inspired many questions from the students about the possibility of an overt Russian intervention in Ukraine, solutions to the ongoing conflict and alternative ways of influencing Russia, such as supporting development of a democratic society.

On Friday, students participated in a panel discussion on political changes in the Middle East. The speakers, Amb. Krzysztof Płomiński, Prof. Janusz Danecki and Mr. Tomasz Otłowski, focused on the differences between current situations in various countries of the region, the reasons for the rise of Islamic radicalism such as ISIS, the influence of colonialist politics and the consequences of the Arab Spring. The participants posed many questions concerning the regional politics of Israel or the impact of culture and religion on the process of democratization.