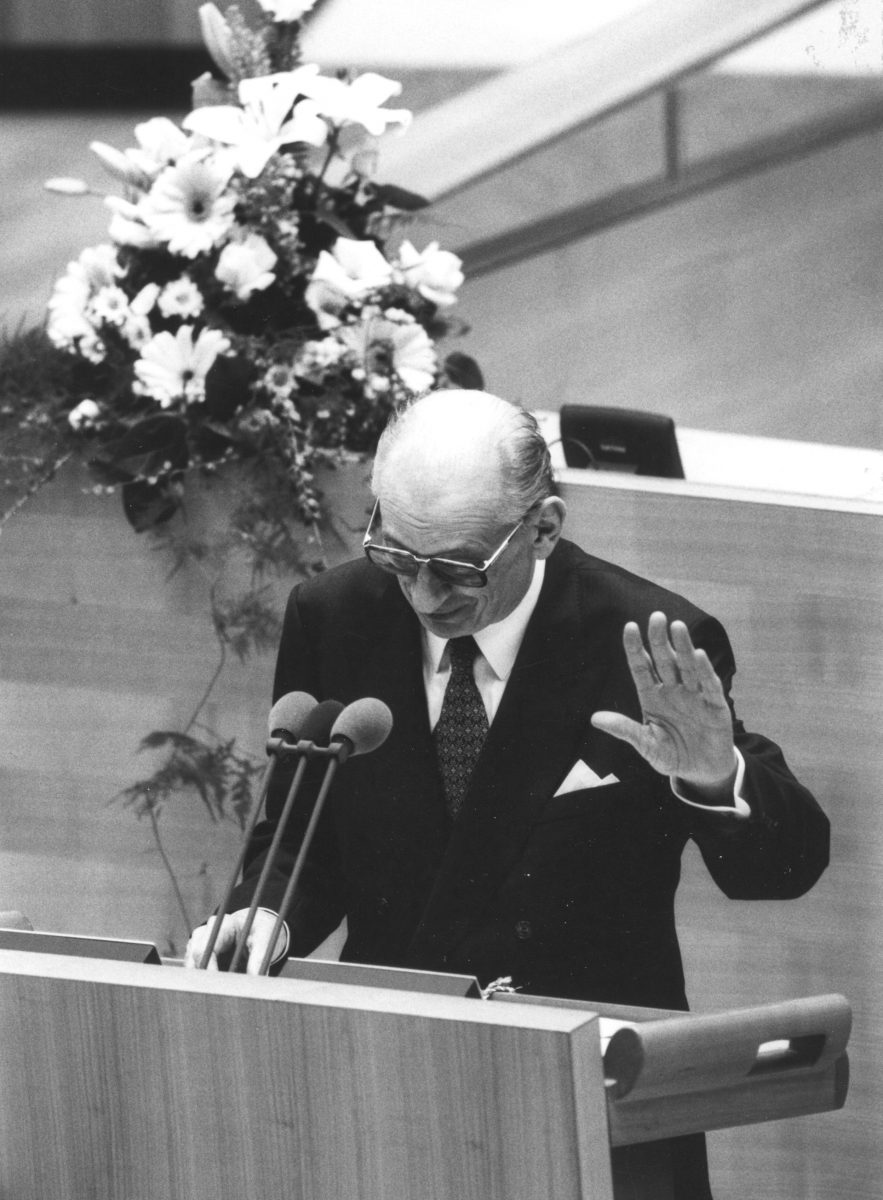 The son of Władysław Bartoszewski (1895-1970), a bank clerk and director of Bank Polski, and Beata Helena Zbiegniewska (1895-1970), he graduated from St. Stanisław Kostka Gymnasium in Warsaw (1937) and the Humanist Lyceum of the Przyszłość (Future) Educational Society (1939). A stretcher bearer during the Battle of Warsaw in September 1939, from May 1940, he worked as an administrative clerk in the Polish Red Cross First Clinic in Warsaw.

On 19 September 1940, he was detained in a street round-up carried out by the Nazis in the Warsaw district of Żoliborz. From 22 September 1940, a prisoner of the Auschiwitz-Birkenau concentration camp (camp number 4427), he was released on 8 April 1941 thanks to the efforts undertaken by the Polish Red Cross.

After his release, he contacted the clandestine Union of Armed Struggle (Związek Walki Zbrojnej). In summer 1941, he submitted a report on his imprisonment to the Information Department of the Information and Propaganda Bureau of the Home Army High Command, the successor to the Union of Armed Struggle. In summer 1942, he joined the Front for the Revival of Poland (Front Odrodzenia Polski, FOP) – an underground Catholic social, educational, and charitable organization headed by Zofia Kossak.

From September 1942, on behalf of the FOP, he became actively involved in the Provisional Committee for Aid of Jews (transformed into the Council for Aid to Jews, codenamed “Żegota”, on 4 December 1942 and working under the auspices of the Delegatura, the Polish Government in Exile Delegation for Poland); he was a Żegota member until the Warsaw Uprising.

In November 1942, he became Prison Unit deputy manager of the Internal Affairs Department Security Division for the Delegatura, responsible for organizing assistance for prisoners, including those imprisoned at the Pawiak. In February 1943, he became information officer and deputy manager of the Jewish Unit of the Delagatura’s Internal Affair’s Department. His duties in the Żegota and the Jewish Unit included organizing assistance for the participants of the Warsaw Ghetto Uprising in April 1943.

From 1 August 1944 he fought in the Warsaw Uprising. Having left Warsaw on 7 October 1944, he continued underground activity in Krakow’s AK Information and Propaganda Bureau.

In autumn 1945, he began to cooperate with the government-affiliated National Remembrance Institute and the Chief Commission for the Examination of German Crimes in Poland, where he was able to use his extensive knowledge about the Nazi crimes, the conditions in concentration camps and prisons, as well as the Holocaust.

Active in the opposition PSL, he soon fell victim to repressions by the security services. On 15 November 1946, he was arrested under false charges of espionage and imprisoned in the Ministry of Public Security (MBP). In December 1946, he was transferred to Rakowiecka prison in Warsaw, where he stayed until his release on 10 April 1948, which he owed to the help of Zofia Rudnicka, former Żegota office manager, who worked in the Justice Ministry. In December 1948, he was admitted to the third year of Polish literature studies at the Humanities Faculty of Warsaw University. His arrest in December 1949 and subsequent five-year stay in prison interrupted his studies again. He was imprisoned in the MBP headquarters and Rakowiecka prison. On 29 May 1952, the District Military Court for Warsaw sentenced him to 8 years of imprisonment on espionage charges. In April 1954, he was transferred to the prison in Rawicz, and in June to Racibórz prison. Due to poor health, he was granted one year’s reprieve in 1954. On 2 March 1955, the Supreme Military Court ruled that he had been wrongly convicted. Released from prison and acquitted, he resumed his career as a journalist.

On 18 April 1963, he received the Knight’s Cross of the Polonia Restituta Order for helping Jews during WWII (on the recommendation of the Jewish Historical Insitute). At the invitation of the Yad Vashem Institute, he visited Israel from September to November 1963, where on behalf of the Council for Aid to Jews he received the Righteous Among the Nations diploma (he was awarded the Righteous Among the Nations medal in 1966).

In November 1963, he became a contributor with Radio Free Europe. As a result of his cooperation with RFE, his flat was searched by the police on 1 October 1970, and in December 1970 he faced the prosecutor’s charges of “acting to the detriment of the Polish People’s Republic in collusion with anti-government forces associated with Radio Free Europe ” The lawsuit against him was finally dropped.

In the following years, he travelled extensively to Austria, Germany, Great Britain, Israel, and also to the US, where he established contacts with the Polish émigré circles (including Jan Nowak-Jeziorański, Adam and Lidia Ciołkosz, Jan Karski, Czesław Miłosz, and Gustaw Herling-Grudziński.

In 1970, as a result of his opposition activity and numerous contacts in the West, he was banned from publishing in Poland (until autumn 1974) and fell victim to other forms of repression (house searches, denial of passport, distribution of defamatory materials). In 1974, he became actively involved in a campaign to seek pardon for the convicted members of the anticommunist organization Ruch.

On 21 August 1980, he signed the letter of intellectuals to the participants of workers’ strikes on the Polish sea coast. In the years 1980-1981, he was a member of the Solidarity trade union. In December 1980, he was a co-founder of the Committee for the Defence of Political Prisoners of the National Committee of the Solidarity trade union. On 13 December 1981, when martial law was introduced in Poland, he was interned, initially in Białołęka prison, and then in Jaworz internment camp in southern Poland. He was released from internment on 28 April 1982 after appeals to the authorities by intellectuals in Poland and abroad. His memoirs from internment were published on the 25the anniversary of martial law, on 13 December 2006.

From September 1990 to March 1995, he was Polish ambassador to Austria. In 1995, he was minister of foreign affairs in Józef Oleksy’s government. He resigned the post when Aleksander Kwaśniewski took office as the president of Poland. He served again as the head of the Polish diplomacy from July 2000 to October 2001 in Jerzy Buzek’s government. In the years 1997-2001, he was a senator and Senior Senate Speaker of the fourth term, and chaired the Senate Foreign Affairs and European Integration Commission. On 20 November 2007, PM Donald Tusk appointed him as secretary of state in the Chancellery of the Chairman of the Prime Minister and plenipotentiary for international dialogue.