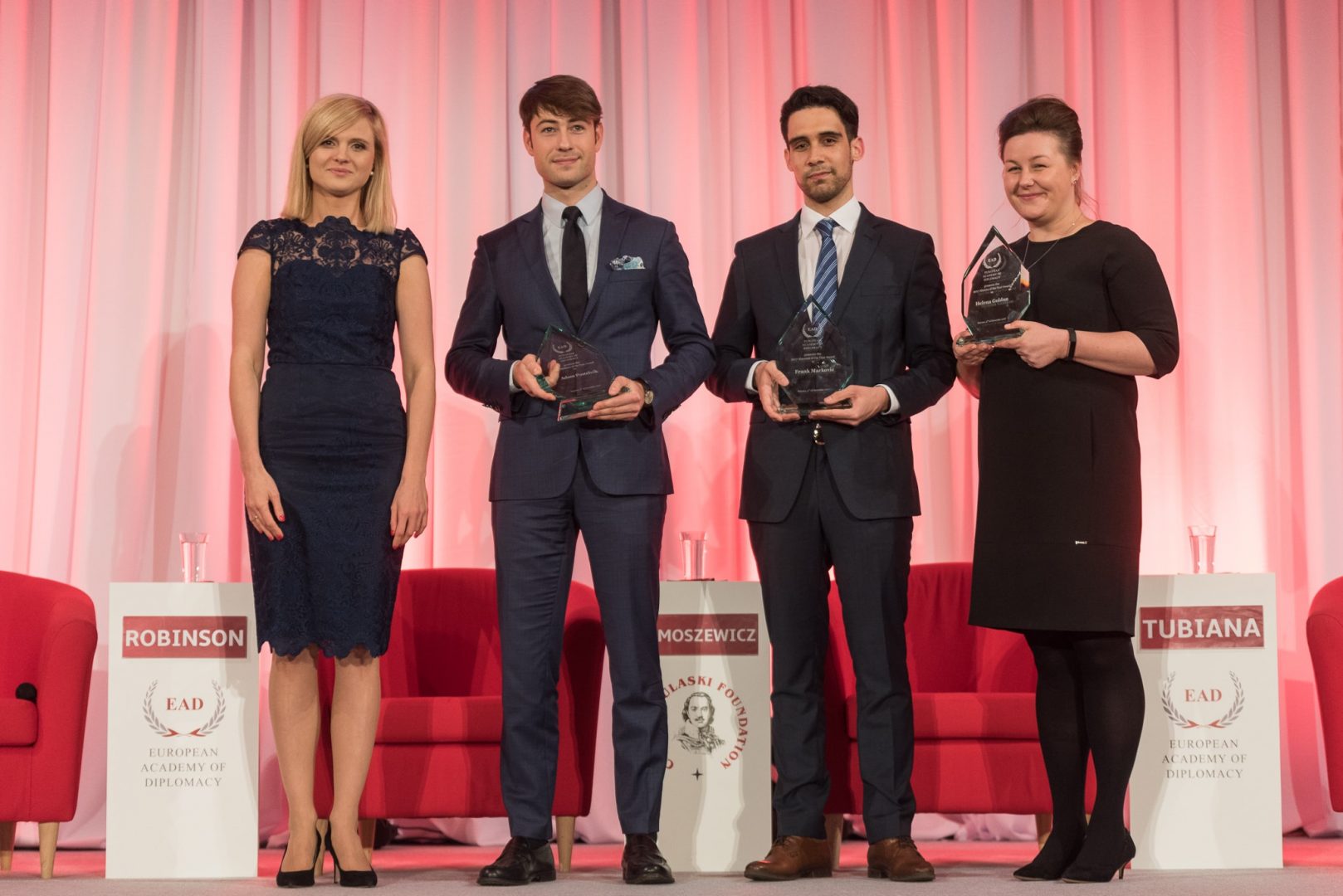 We are proud to present the three exceptional individuals, who received the 2017 EAD Alumni of the Year Award! They were chosen for their accomplishments in the spheres of international relations and social activism, as well as continuing to achieve and embody the values of the European Academy of Diplomacy’s – Respect & Dialogue, Co-ownership, Empowerment and Ethical Engagement. The awards were presented on the 2nd of December, during the Graduation of the 13th and Inauguration of the 14th edition of the Academy of Young Diplomats. The 2017 EAD Alumni of the Year are

Alumna of the 5th edition of the Academy of Young Diplomats

Helena Goldon is a graduate of the University of Warsaw’s Cultural Studies. As a consultant with the World Bank and recently London School of Hygiene and Tropical Medicine, she has devoted her career towards better communication of water, sanitation and hygiene (WASH) knowledge to relevant target audiences for raising profile of WASH sector in Tanzania. She coordinated the Tanzania edition of the 2012 World Bank’s global Sanitation Hackathon and was part of a team communicating knowledge on solar water pumping for sustainable water supply. Prior to joining AYD, as a Polish Radio reporter from Sub-Saharan Africa, she initiated and organized a successful Live Fundraising Auction for street children in Uganda. Her clients include Polish, Irish, and Tanzanian NGOs as well as the private sector.

Alumnus of the 2015 Visegrad School of Political Studies Annual Program

Frank Markovic is a founder of European Public Affairs.eu, an award-winning platform for young Europeans who wish to partake in the debate on the future of Europe. Originally from Slovakia, he has lived, worked and studied in a number of EU countries, including the UK, Netherlands, and Belgium. He currently lives in Brussels where he has been working in EU public affairs for over 5 years. Passionate about politics and Central Europe, he has been a champion of bridging the information gap between the old and new EU states. Frank has written numerous articles ranging from Brexit to EU’s external relations and outside his working hours he has volunteered for organisations helping young people enter the world of foreign policy. Recognising his achievements, in 2016 he was named by the Forbes Magazine as one of the ’30 under 30’ Europeans in the category of policy.

Adam Pustelnik is a graduate of law and international relations at the University of Łódź and European Academy of Diplomacy. Currently Director of the Investor Service and International Cooperation Bureau in the The City of Lodz Office, formerly employed at the Ministry of Sports and Tourism, as well as the Polish Parliament and owner of a business entity. He is specialized in the sphere of international politic relations and international law issues.

Meet the students of the Academy of Young Diplomats!