External session of the 11th Edition of the Academy of Young Diplomats - Conference „Poland and Germany: How to Respond to Russia?” 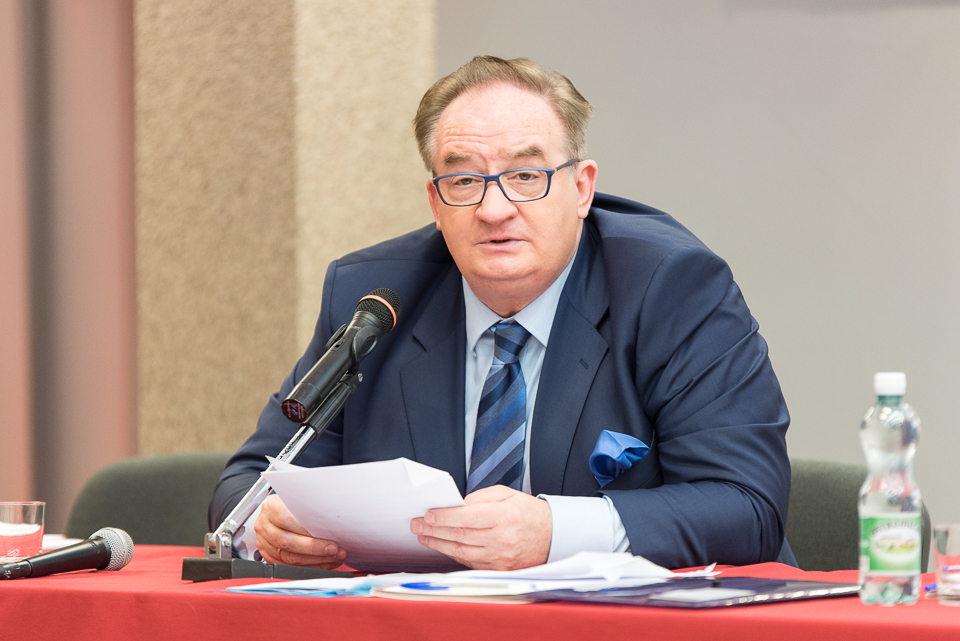 External session of the 11th Edition of the Academy of Young Diplomats – Conference „Poland and Germany: How to Respond to Russia?”

On 24th January 2015, as a part of the external session of the Academy of Young Diplomats, a conference was organized by the European Academy of Diplomacy, the Konrad-Adenauer-Stiftung in Poland and Faculty of International and Political Studies (WSMiP) of the University of Łódź. The conference, titled “Poland and Germany: How to Respond to Russia?”, was dedicated to the international relations in the Eastern Europe. The conference gathered experts from Poland, Russia and Germany, as well as over 200 students from both Academy of Young Diplomats and the University of Łódź.

The participants were officially greeted by Jason Worlledge, the Executive Director of the EAD, and Prof. Tomasz Domański, the Dean of the WSMiP. It was followed by the introductory lecture “EU-Russia-Ukraine Bermuda Triangle: what disappers, what survives”, given by Dr Jacek Saryusz-Wolski, Member of European Parliament.

The first discussion panel “Russia’s reversal from partnership with the West: origins and consequences for Europe” was dedicated to the implications of changes in Russia’s policy towards the West. The speakers, Prof. Hannes Adomeit (College of Europe), Dr Hans-Peter Hinrichsen (Head of the Political Section of German Embassy in Poland) and Dr Przemysław Żurawski vel Gajewski (Faculty of International and Political Studies, University of Łódź) focused on the origins of the current state of affairs in the Eastern Europe, and about the possible ways in which the West can contribute to changes in Russia’s strategy towards Europe. The experts agreed that the EU should demonstrate more assertive reaction to the Ukrainian crisis – by supporting Ukraine financially and by strengthening its cooperation with NATO. They also indicated certain differences between the civil society in Russia and Ukraine.

During the second panel “Energy security in Eastern Europe”, Dr Szymon Kardaś (Centre for Eastern European Studies) described the factors that contribute to the continuing attractiveness of the European energy market and its temporary advantage over the Chinese market. It was also pointed out that Turkey’s role as a transit state is growing in importance. The next guest – Mr Jędrzej Czerep (Casimir Pulaski Foundation) – presented the consequences of abandoning South Stream project for the Balkan countries. He also described the prospects of attracting these countries to the EU energy projects. The panel was concluded with the discussion on technical problems with shale gas production and its role in the energy security, presented by Mr Maciej Kowalski (Casimir Pulaski Foundation).

The last part of the conference was devoted to the question of Russianness and its implementation in the internal policy. The use of the concept in the Russian history was presented by Mr. Marek Menkiszak (Centre for Eastern European Studies) during the panel “The awakening of “Russianness”: modern politics in Russia”. He also analysed how the image of Russianness is shaped when it is not based on ethnicity and how it functions in the post-soviet era (the key point being its use by the President Vladimir Putin). Thanks toMs. Anastasia Sergeeva’s speech (International Republican Institute) the participants could get an insight into Russian media propaganda and the reactions it provokes among Russian citizens. It was followed by the Dr. Łukasz Jasina’s (Kultura Liberalna) description of the image of the West in the Russian media. He also talked about problems the Polish media have with presenting Russia and President Putin.

The session in Łódź also included the integration activities on Friday and sightseeing on Sunday.