Graduation & Inauguration ceremonies of the Academy of Young Diplomats 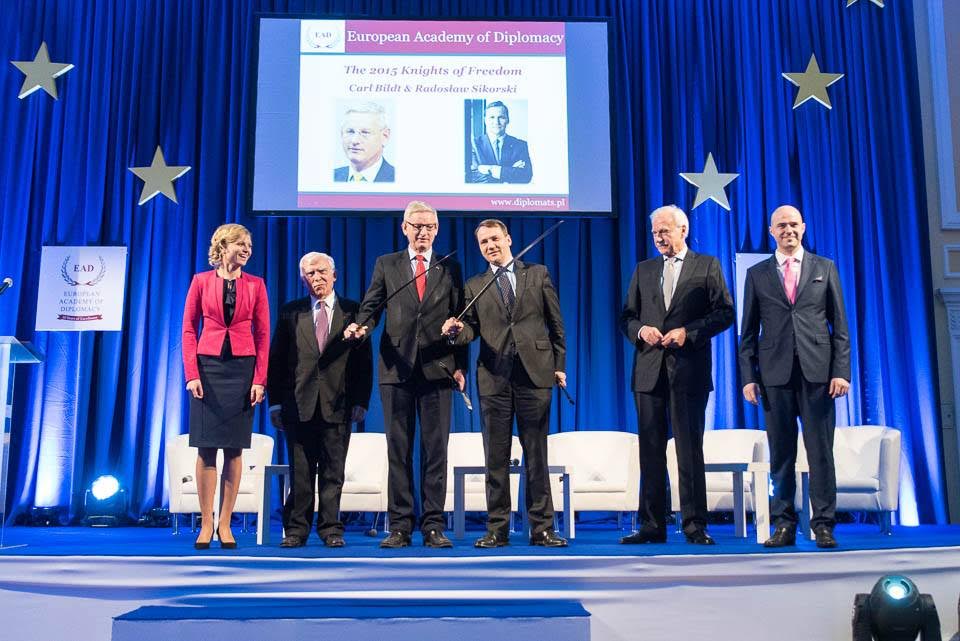 Graduation & Inauguration ceremonies of the Academy of Young Diplomats

The 5th of December 2015 saw the Graduation & Inauguration ceremonies of the Academy of Young Diplomats and the presentation of the 2015 Casimir Pulaski Foundation’s Knight of Freedom award, presented to Carl Bildt and Radoslaw Sikorski.

More than 150 students of the Academy of Young Diplomats received their diplomas upon graduating from the 11th edition of the program and the 5 best students were presented special awards on the main stage by EAD Director Katarzyna Pisarska, PM Carl Bildt and Marshal Radosław Sikorski.

The 12th edition of the Academy was also officially opened by Ambassador Jan Wojciech Piekarski with a presentation of the 12th edition’s patron – General Elżbieta Zawacka – by Katarzyna Minczykowska of the General Zawacka foundation.

Zbigniew Pisarski, President of the Board of the Casimir Pulaski Foundation introduced the 2015 Knight of Freedom awardees, before laudation speeches were given by Professor Adam Daniel Rotfeld and Dr. Andrzej Olechowski. The award was then presented the dignitaries for their roles as architects and founding fathers of the Eastern Partnership initiative.

The ceremonies were closed with the presentation of the 2015 Alumni of the Year to four outstanding young leaders – Natalia Kleina (Poland), Mateusz Krupczyński (Poland), Michael Safadi (Lebanon) and Jagoda Smagłowska-Nowak (Poland).