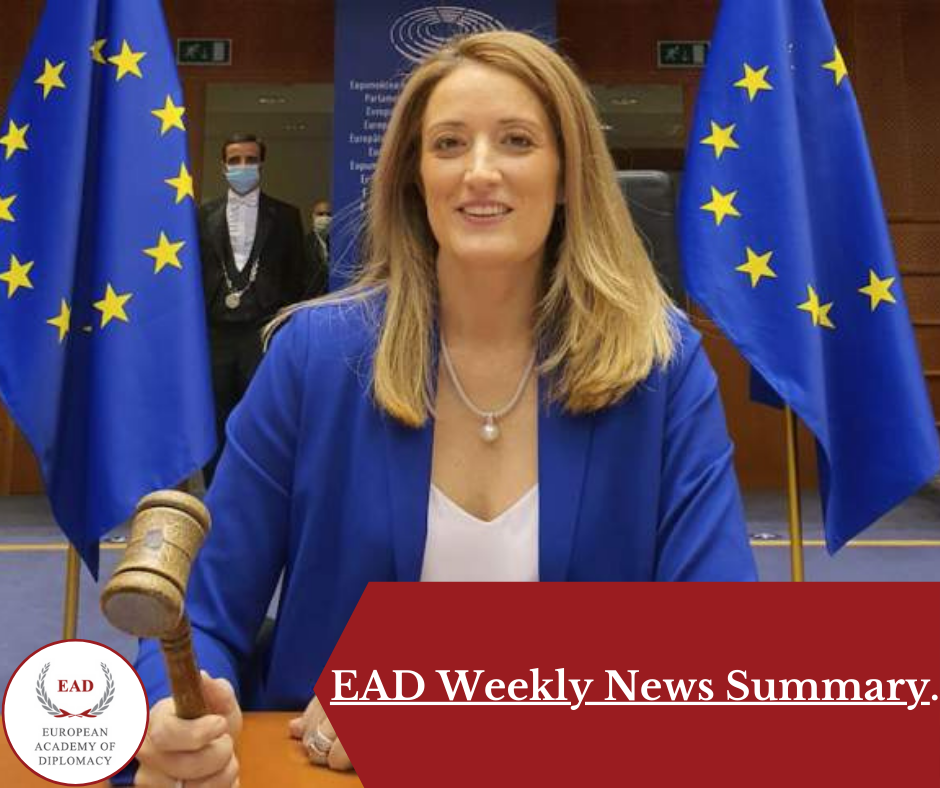 Following the death of David Sassoli, 65, the European Union Parliament has elected the youngest-ever President, Roberta Metsola, being the first woman in this role for 20 years.

She is Maltese and one of the three women in the top EU jobs alongside the head of the European Commission and the European Central Bank. She has a record of anti-abortion stance, however she insists that she will represent the EU Parliament’s views rather than her own.

She is a lawyer by training and her previous jobs included acting as legal adviser to British Politician, Baroness Catherine Ashton, who was then the EU’s top diplomat.
(Source: BBC News)

Situation on the Ukrainian – Russian border

What is the current situation on the Ukrainian-Russian border?
Despite numerous talks and diplomatic negotiations involving the West and Russia; it is still quite unclear whether they will ease the tensions between Russia and Ukraine. Fear looms over the imminence of Russia invading Ukraine.

After talks in Geneva, Russian Deputy Foreign Minister, Sergi Riyabkov, insisted that there were no plans nor any intentions of invading Ukraine. However, President Vladimir Putin earlier warned of military measures if the West does not meet its demands. They include the halt of the expansion of NATO and the EU towards the Eastern Partnership countries.

The US has made clear its commitment to helping Ukraine defend its sovereign territory. President Joe Biden has strongly declared its support for Ukraine and promised to intervene in case Russia choses to enter Ukrainian territory.
(Source: BBC News)

The Polish government has raised its cybersecurity threat level in response to an attack on neighboring Ukraine last week and amid escalating tensions with Russia. Poland’s Prime Minister, Mateusz Morawiecki, has signed an ordinance introducing the ALFA-CRP alert level across the country. That is the lowest of four alert levels available to the government under anti-terrorism legislation introduced in 2016.

It obliges the authorities to conduct “increased monitoring of the security of ICT systems” and to check for breaches of digital communications. Any suspicious activity should be reported to the police. The alert level, which will be in force from Wednesday until the end of Sunday, comes after around 70 Ukrainian state websites, including those of several ministries, were hit by a large-scale cyber attack last week.
(Source: Notes from Poland)

The underwater volcano erupted near the remote island nation of Tonga, triggering a chain of tsunami warnings and causing strong waves as far away as the United States. It was likely the biggest recorded eruption anywhere on the planet in more than 30 years, according to experts.
Images from space captured the eruption in real time, as a huge plume of ash, gas and steam was spewed up to 20 kilometers (12.4 miles) into the atmosphere — and tsunami waves were sent crashing across the Pacific.
According to the New Zealand High Commission in Nuku’alofa on Monday,the eruption and subsequent tsunami caused “significant damage” along the western coast of the main island of Tongatapu.
(Source: CNN)

One year in office of President Biden

Thursday, January 20, marked the end of the first year of Joe Biden’s presidency. Despite the fact that his first year was met with many unprecedented challenges such as the Covid pandemic and internal struggles, the 12 months did have some victories.
He successfully guided the channeling of trillions in new funding to combat the Covid pandemic and orchestrated a nationwide vaccination campaign. Economy-wise, his American Rescue Plan passed in Congress and strengthened the economy which suffered a strong blow in the early days of the pandemic. He has overseen a boom in the availability of jobs which caused a sharp decrease in unemployment and a drop in poverty.
However, his first year also marked the chaotic withdrawal of American troops in Afghanistan, humiliation of France over the AUKUS deal, and little success in creating a working relationship with China.
(Source: CNN)