Inauguration and Graduation of the Academy of Young Diplomats 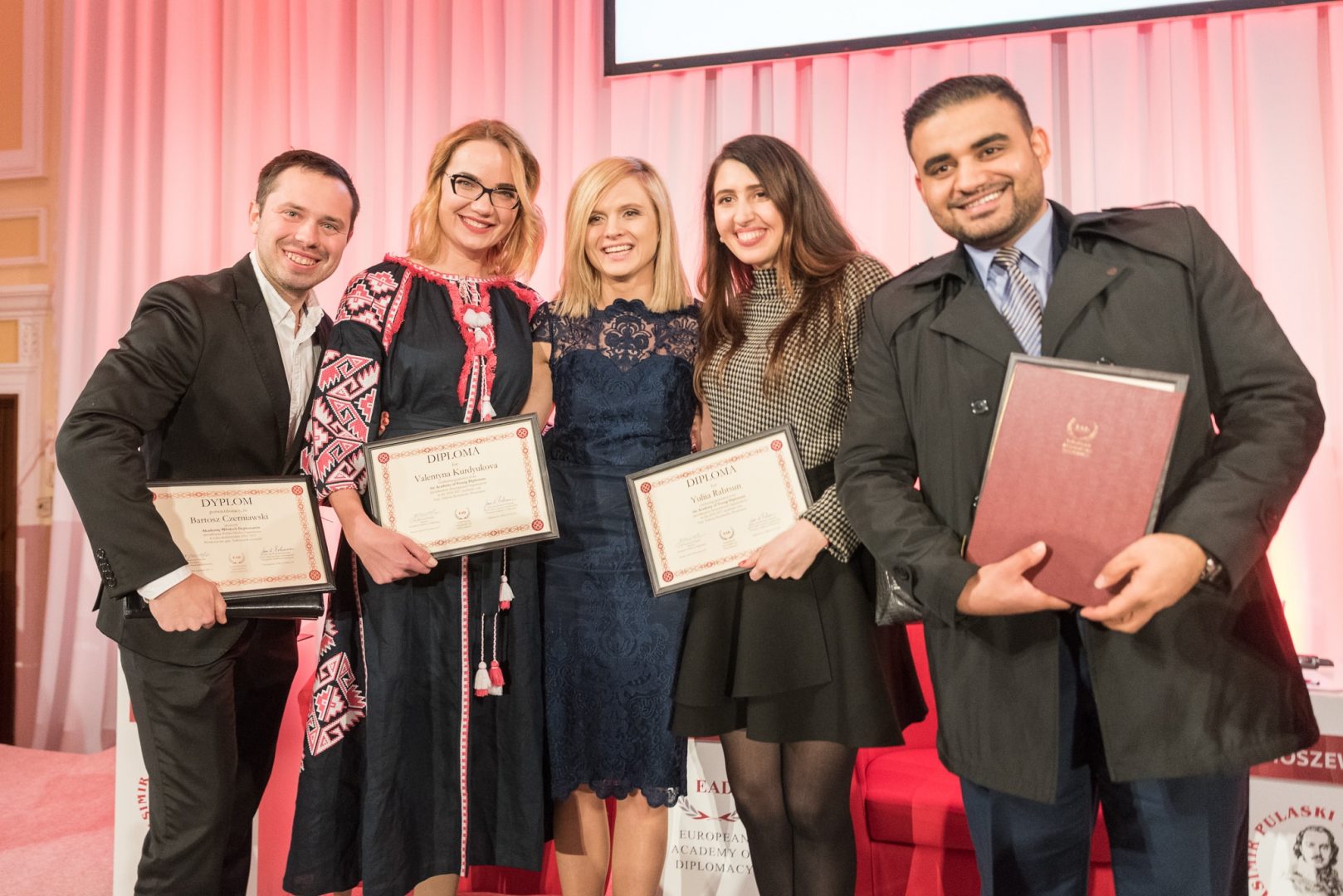 Inauguration and Graduation of the Academy of Young Diplomats

On 2nd December 2017, the European Academy of Diplomacy held the graduation of the 13th edition of the Academy of Young Diplomats and inauguration of the 14th edition. The program started with our partner, the Casimir Pulaski Foundation, presenting the Knight of Freedom award to Mary Robinson, President of Ireland (1990 – 1997) and UN High Commissioner for Human Rights (1997 – 2000).
Opening remarks were delivered by the Director of the European Academy of Diplomacy, Dr. Katarzyna Pisarska. Director Pisarska mentioned that although it is the graduation of the 13th edition of the Academy of Young Diplomats, it is as well an inauguration for a new generation of over 180 young, high potential leaders – the 14th edition. She also emphasized that ‘the ceremony is special among others because we have a pleasure to host an inspiring woman and great leader H.E. Mary Robinson’.
Zbigniew Pisarski, President of the Casimir Pulaski Foundation introduced the Knight of Freedom award. ‘It is a tribute to individuals who by their actions promoted the ideas of freedom, justice and democracy. The recipients of the award include among others Władysław Bartoszewski, Vaira Vike-Freiberga or Thoomas Hendrik Ilves. This year H.E. Mary Robinson will join this group of brilliant people’ – he added. Laurence Tubiana, CEO of the European Climate Foundation in her laudation for H.E. Mary Robinson said that she is a ‘true inspiration and that she never rests on her laurels. She always move forward, looking more into the future’.
H.E. Mary Robinson before receiving the Knight of Freedom Award delivered a speech in which she deeply thanked for inviting her as this is not her first visit to Poland. ‘I had the pleasure to visit Poland in 1994 to meet with President Wałęsa. I remember that during my visit I learned about your pride that you hold as a nation and your constitution which was adopted on 3 may 1791 and is the second oldest written constitution, right after the American’ – she stated. H.E. Robinson also expressed her trust in the youth, especially in those who participate in programs like the Academy of Young Diplomats.

During the following part of the ceremony, the students of the 13th edition of the AYD received their diplomas, including 4 diplomas with honors. In addition, together with our partners: Casimir Pulaski Foundation, Fundacja PZU and Polish Forum of Young Diplomats, we presented 16 scholarships to the students of the upcoming 14th edition. After a break, three exceptional individual were awarded with the 2017 EAD Alumni of the Year Award: Helena Goldon (Poland), Frank Markovic (Slovakia) and Adam Pustelnik (Poland). The ceremony was concluded with a panel discussion “Climate Change: Global Context”. The guest speakers included: H.E. Mary Robinson, Dr. Włodzimierz Cimoszewicz, Prof. Laurence Tubiana and Mr. Edwin Bendyk (moderator).

CNRS hosts the launch meeting of the project InsSciDE - Inventing a shared Science Diplomacy for Europe.