Minister Vuk Jeremić at the Academy of Young Diplomats 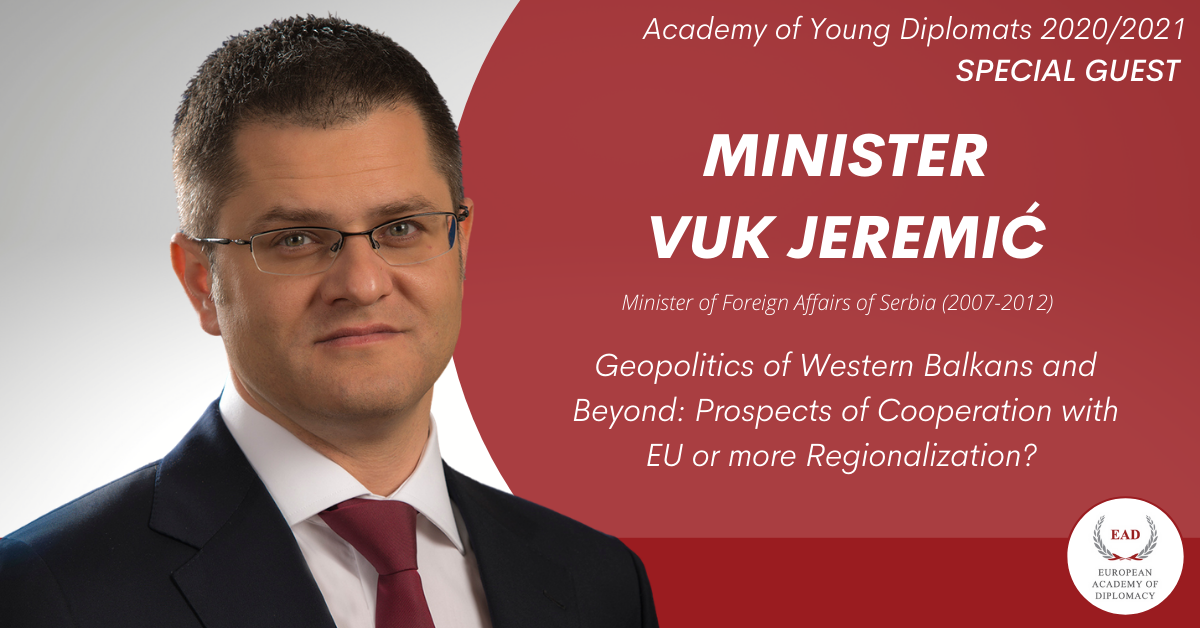 Minister Vuk Jeremić at the Academy of Young Diplomats

The Academy of Young Diplomats is a postgraduate Program preparing Future Leaders through hands-on Diplomatic Workshops, Specialization Classes, and Study Visits, over a one-of-a-kind learning experience in the first non-governmental, non-for-profit Diplomatic Academy in Europe. In the upcoming 07-08 May 2021 session of the Program, Minister Jeremić will deliver a Leadership Lecture to the AYD Participants on the Geopolitics of Western Balkans and Beyond: Prospects of Cooperation with EU or more Regionalization?

During the first year of his tenure as a Minister of Foreign Affairs of Serbia (2007-2012), Vuk Jeremić chaired the Council of Europe’s Committee of Ministers. In 2011 and 2012, Mr. Jeremić led Serbia’s successful campaign for the Chairmanship-in-Office of the Organization for Security and Cooperation in Europe (OSCE) for the year 2015. In 2012, he was directly elected by the majority of the world’s nations to be the President of the 67th session of the UN General Assembly – Journal of International Relations and Sustainable Development, His Excellency was named a Young Global Leader by the World Economic Forum in 2013. And in 2014, Mr. Jeremić was appointed to the Leadership Council of the United Nations Sustainable Development Solutions Network (UN SDSN). Mr. Jeremić currently serves as President of the Center for International Relations and Sustainable Development and Editor in chief of Horizons.

To become the participant of the next edition of the Academy of Young Diplomats, apply for the Program now  https://bit.ly/3uCsX8y.

The Early Birds Admissions will be open till the 30th of April 2021.

Academy of Young Diplomats – Main Round Admissions are open now!