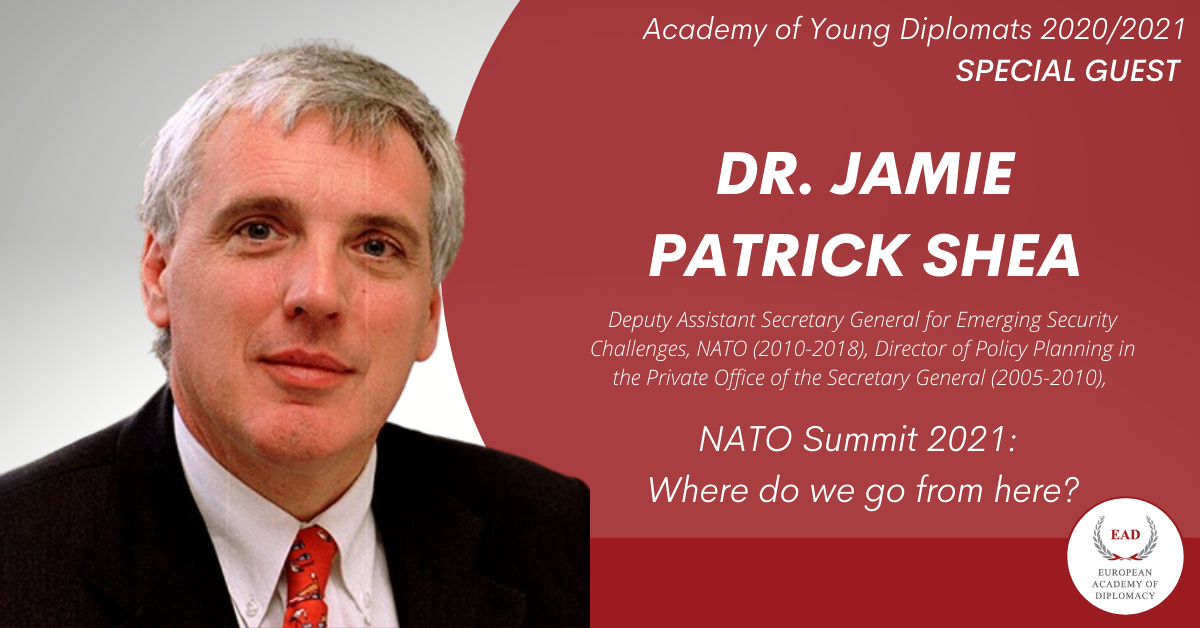 The European Academy of Diplomacy is delighted to announce that Dr. Jamie Shea will be our Special Guest for the July Session of the 2020/2021 edition of the Academy of Young Diplomats co-organized with NATO, the strategic partner of the Program.

To open the intense Session dedicated to NATO, Dr. Jamie Shea will meet the participants at the Global Talks to talk about NATO’s present and future challenges. The July Session will close this year’s edition of the Academy of Young Diplomats, the annual postgraduate diplomatic program that aims to prepare and inspire young future leaders, through hands-on Diplomatic Workshops, Specialization Classes, and Study Visits, within a one-of-a-kind learning experience.

Dr. Shea’s career in NATO lasted for 38 years. The last position he covered within the organization was Deputy Assistant Secretary-General for Emerging Security Challenges (2010-2018), where he was in charge of areas such as non-proliferation of weapons of mass destruction, cyber defense, counter-terrorism, and energy security. Prior to that, Dr. Shea was also Director of Policy Planning in the Private Office of the Secretary-General (2005-2010); Deputy Assistant Secretary-General for External Relations, Public Diplomacy Division (2003-2005); Director of Information and Press (2000-2003); Spokesman of NATO and Deputy Director of Information and Press (1993-2000); Deputy Head and Senior Planning Officer in the Policy Planning and Multilateral Affairs Section of the Political Directorate (1991-1993), as well as Assistant to the Secretary-General of NATO for Special Projects (1988-1991).

The session is supported by NATO’s Public Diplomacy Division, the strategic partner of the European Academy of Diplomacy.

Special Guest - Radosław Sikorski at the Academy of Young Diplomats