Special Guest - Radosław Sikorski at the Academy of Young Diplomats 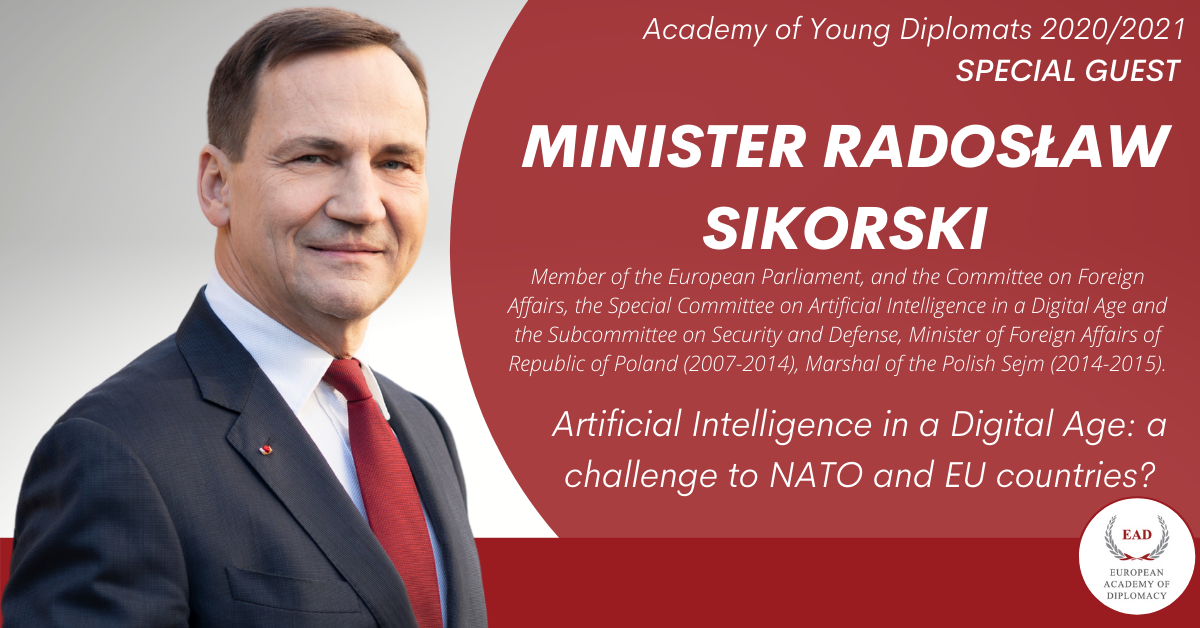 Special Guest – Radosław Sikorski at the Academy of Young Diplomats

The European Academy of Diplomacy is delighted to welcome Minister Radosław Sikorski as a Special Guest for the July Session of the 2020/2021 edition of the annual Diplomatic Program of the European Academy of Diplomacy – The Academy of Young Diplomats.
The Academy of Young Diplomats is a postgraduate program preparing and inspiring the leaders of tomorrow, through hands-on Diplomatic Workshops, Specialization Classes, and Study Visits, within a one-of-a-kind learning experience. In the last session of this year’s edition, co-organized with NATO, the participants will have the opportunity to take part in a Leadership Lecture delivered by Minister Radosław Sikorski entitled “Artificial Intelligence in a Digital Age: a challenge to NATO and EU countries?”
Mr. Radosław Sikorski served as Minister of Foreign Affairs of the Republic of Poland from 2007 to 2014. Prior to that, Mr. Sikorski was Deputy Minister of National Defense (1992); Deputy Minister of Foreign Affairs (1998-2001), and Minister of National Defense (2005-2007). From 2014 to 2015, Mr. Sikorski was also the Marshal of the Polish Sejm.
Since 2016, Mr. Sikorski is a Chairman of the Programme Council of the Civil Institute; Senior Fellow of the Center for European Studies at Harvard University, and Expert of the Center for Strategic and International Studies in Washington, D.C.
In 2019, Mr. Sikorski became a Member of the European Parliament, Chair of the Delegation for relations with the United States, and he is currently a Member of the Committee on Foreign Affairs, the Special Committee on Artificial Intelligence in a Digital Age, and the Subcommittee on Security and Defense.
The session is supported by NATO’s Public Diplomacy Division, the strategic partner of the European Academy of Diplomacy.