Special Guest - Linas Linkevičius at the Academy of Young Diplomats 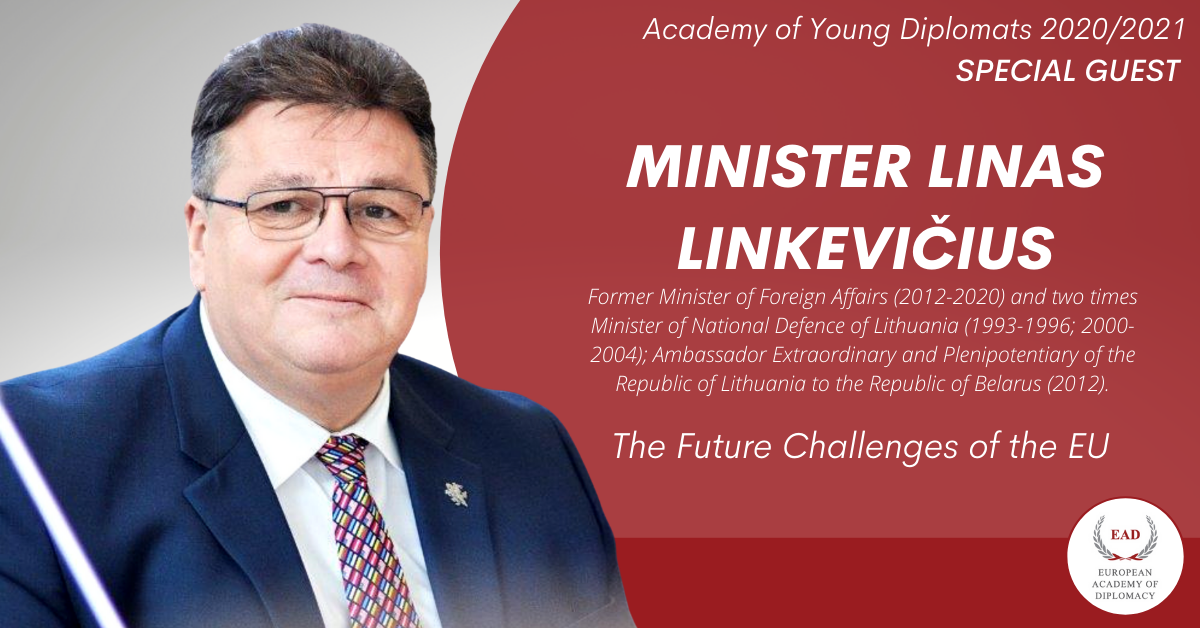 Special Guest – Linas Linkevičius at the Academy of Young Diplomats

The Academy of Young Diplomats is a postgraduate program preparing and inspiring the leaders of tomorrow, through hands-on Diplomatic Workshops, Specialization Classes, and Study Visits, within a one-of-a-kind learning experience. In the upcoming session, the participants will have the opportunity to take part in a Leadership Lecture delivered by Linas Linkevičius entitled “The Future Challenges of the EU”.

Mr. Linas Linkevičius served as Lithuania’s Minister of Foreign Affairs (2012-2020) and was the Lithuanian Permanent Representative to NATO (2005-2011) prior to that. Throughout his career, Mr. Linkevičius was elected as a Member of the Lithuanian Parliament (1992-1996), where he worked as the Deputy Chairman of the Committee on Foreign Affairs and Head of the Seimas Delegation to the North Atlantic Assembly. In 1993, he was promoted to Minister of National Defence of Lithuania, a role that he held till 1996. He was appointed for the same mandate from 2000 to 2004. After he served as Ambassador and Head of Mission of Lithuania to NATO and the Western European Union (WEU). In the years 2004-2005, Mr. Linkevičius was the Ambassador for Special Missions at the Lithuanian Ministry of Foreign Affairs.
In 2012, Mr. Linkevičius was the Ambassador Extraordinary and Plenipotentiary of the Republic of Lithuania to the Republic of Belarus. He is also a member of the Executive Board for the European Leadership Network (ELN) and, last year, he was among the speakers at the Warsaw Security Forum 2020.

To take part in the next edition of the Academy of Young Diplomats, click here and apply now:  https://bit.ly/3uCsX8y

The Main Round Admissions are open until June 30th, 2021!

Special Guest - Federica Mogherini at the Academy of Young Diplomats