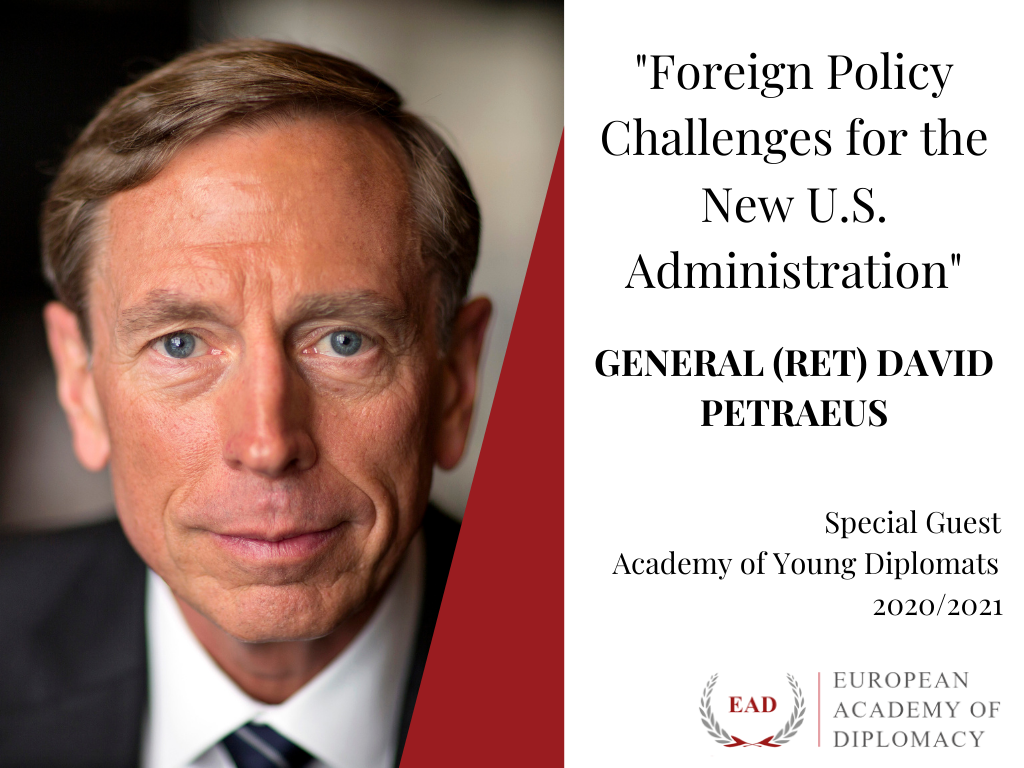 It was a great honour and pleasure for the European Academy of Diplomacy that the Special Guest for January online session of the Academy of Young Diplomats 2020/2021 was General David H. Petraeus!

General David Petraeus was appointed Director of the Central Intelligence Agency in 2011 by former US President Barack Obama and served until 2012. Prior to his assuming the directorship of the CIA, he spent 37 years in the US military. Among his command assignments, Petraeus served first as chief of operations (1995) for the United Nations Mission to help establish democracy in Haiti and as assistant chief of staff for operations (2001-02) for the Multinational Stabilization Force to enforce a ceasefire in Bosnia and Herzegovina. He first led troops as commander during the US-led invasion of Iraq in March 2003. Here, he distinguished himself by his pragmatic and responsive approach to the needs of the local population: in addition to providing the security framework, it launched a major reconstruction and counter-insurgency effort through collaboration with and support for the local population. In January 2007, President Bush appointed Petraeus to head a multinational force in Iraq. Eight months after his appointment, Petraeus went to Capitol Hill to testify on the overall progress of the war and reported that the incidence of violent attacks had decreased substantially. In April 2008, General Petraeus was appointed the head of Centcom, the organization responsible for all US military operations in an area spanning 25 countries, from the Horn of Africa to the Middle East and Central Asia. In June 2010, Petraeus was appointed commander of US and NATO forces in Afghanistan.