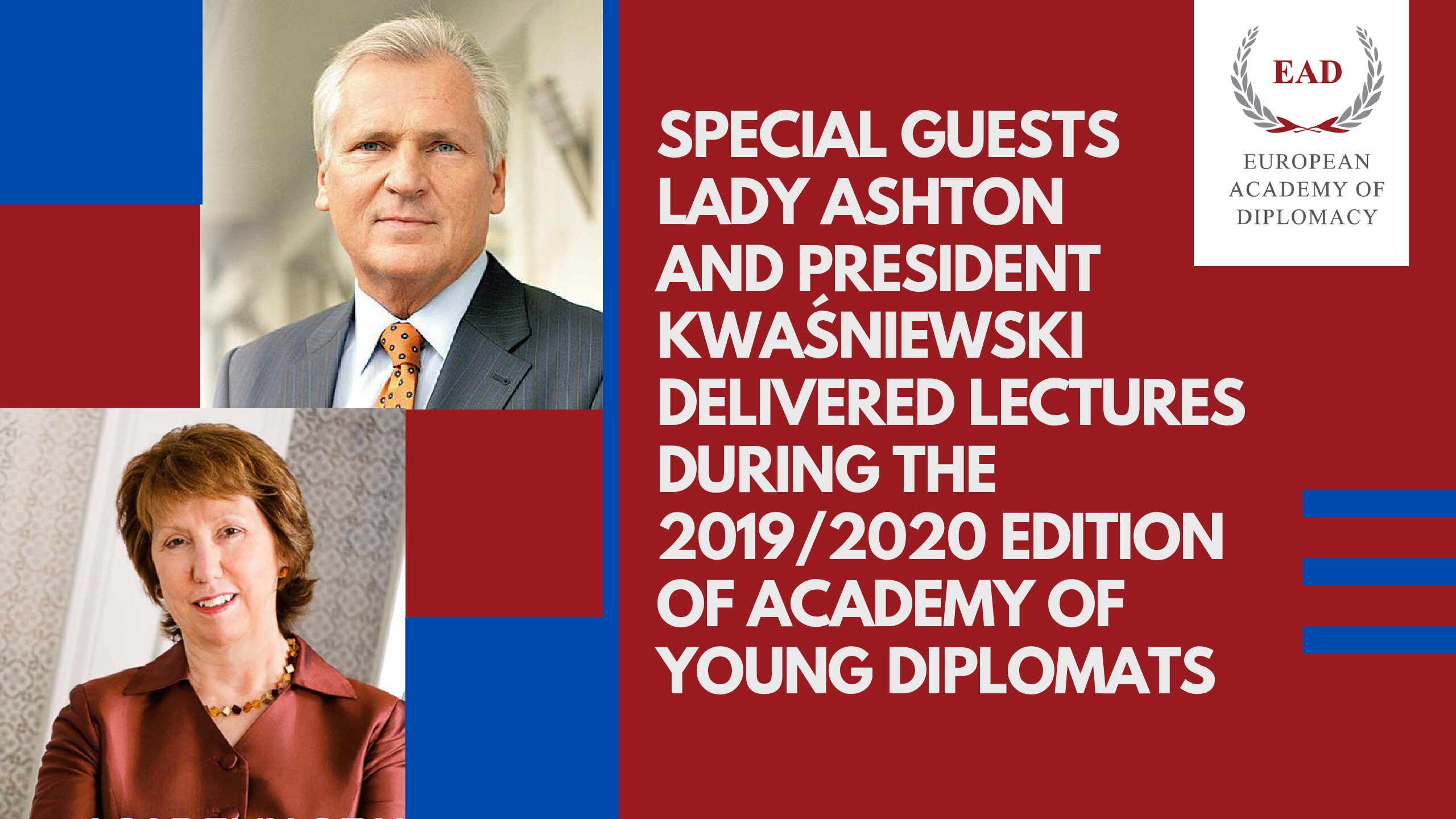 We are proud to announce that the last session of the Academy of Young Diplomats 2019/2020 finished on Sunday after three intensive days of lectures and workshops.

It was an honor to host a Global Talk delivered by Lady Catherine Ashton on the topic of “The Future of EU as a Global Actor” on Friday, and a VIP Lecture on “The world in 2021: what awaits the new generation of leaders” by President Aleksander Kwaśniewski. We are pleased to be able to deliver such important topics by the hands of highly experienced and professional speakers.

Lady Catherine Ashton is the Baroness of Upholland, High Representative of the Union for Foreign Affairs and Security Policy and First Vice President of the European Commission in the Barroso Commission (2009-2014). Her main focus through her parliamentary career were human rights and education issues.Between 2001-2004 Mrs. Ashton served as a junior education minister, and in 2002 assumed the leadership of the early-childhood-development initiative Sure Start. It was in the year 2004 when Lady Catherin became a junior minister for constitutional affairs. In May 2006, was admitted to the Privy Council and, on that same year she was awarded as the politician of the year by the gay and lesbian rights groups Stonewall for her efforts in promoting equality. One year later (2007), Mrs. Ashton served as a junior justice minister and shorter after she was promoted to leader of the House of Lords by Prime Minister Gordon Brown. Following, in the year 2008, she was appointed as Trade Commissioner to the European Commission.

President Aleksander Kwaśniewski was the President of the Republic of Poland between 1995 and 2005. A great advocate of Poland’s membership in both NATO and the European Union. It was under his leadership that Poland finally joined NATO in 1999. He is an active supporter of further alliance enlargement under the “open door” policy. A strong proponent of European integration, Kwaśniewski campaigned for approval of the European Union accession treaty in 2003, and saw Poland become a member on May 1, 2004. On March 7, 2006, Kwaśniewski was appointed Distinguished Scholar in the Practice of Global Leadership at Georgetown University, where, as a visiting faculty member, he taught students in the Edmund A. Walsh School of Foreign Service. He is also i.a. member of the Board of Trustees of the International Crisis Group, member of the Atlantic Council of the United States, member of the Bilderberg Group, Head of the Supervisory Board of the Amicus Europae Foundation in Warsaw and International Center for Political Studies in Kiev, Head of the International Council on Tolerance and Reconciliation, Head of the Board of Yalta European Strategy.

Nominations for the AYD 2020 Alumni of the Year Award