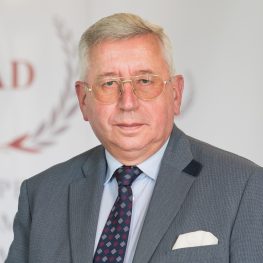 Krzysztof Płomiński is a retired career diplomat – ambassador ad personam, former director and two-time deputy director of Africa and the Middle East Department in the Polish Ministry of Foreign Affairs. He was posted in Libya and Jordan and worked as ambassador of Poland to Iraq and Saudi Arabia. During his mission to Baghdad Poland took care of the US Interests in Iraq. Mr. Płomiński is a diplomatic advisor in the Polish National Chamber of Commerce and a co-founder of the Polish-Arab Initiative Foundation. The author of several economic and foreign policy publications, academic lecturer and media commentator on the Middle East affairs. His book “Arabia Incognita. Polish Ambassador’s Report” was published in January 2019. He studied Law at Łódź University and he is a graduate of the International Relations Institute in Moscow and the Academy of International Law in the Hague. Honored with Officer’s Cross of the Polonia Restituta Order, as well as Saudi and US decorations.